Within 24 hours of getting back from the September 2020 trip I was already planning the next. All the potential mainland places I’ve been that might have met my requirements seem to have been on peninsulas. There’s only 1 realistic one left to investigate which also happens to be the only ‘point’ of Scotland we haven’t been to in 2020 (we’ve done, N, NE, E, S; NW is not an option). I really hadn’t intended going up again til I had at least a long weekend, but the mid-October threat of ‘home’ going into lockdown and another depressing weekend of doing nothing resulted in a very last minute impulsive decision to go as far west as we could in the UK mainland. Let’s call it checking out the location to see if my theory of its suitability was correct and to plot a potentially longer escape. We visited Ardnamurchan lighthouse because it’s just about as far west as you can get on the UK mainland but our real destination was Sanna, and wow, it met my expectations! 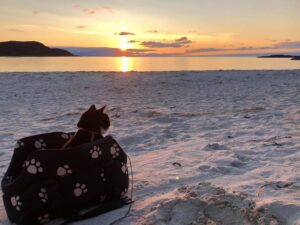