In 2012 I went to the Arctic. I’d wanted to do that for years and the whole Quark Arctic experience was wonderful – the expedition leader did say it was his best trip. I listened to everyone who’d been to Antarctica first talking about it but never thought I’d make it there. We were given a slideshow and I thought for the few days while I travelled home at the end of the trip about what I wanted to do next. There was just 1 little problem with Antarctica (other than the expense and long flights)… everyone said I should go to South Georgia for the ‘wow’ of wildlife but I really wanted to cross the circle. Fortunately I didn’t have to make a decision because a new trip had just been released for 2014 which did both. I also decided I wanted to paddle in ice with penguins! I then spent many hours on the canal, river, and in the pool trying to improve my paddling fitness.

Embarkation day!!! I was very lucky to have 3 of the same staff (and 1 passenger) who I had travelled with in the Arctic – they all remembered me and were pleased to see me – and the rest of the expedition team were all fantastic too. The ship we were on was built in 1975 so was the same age as me and had just been renamed the Sea Adventurer.

We headed down the Beagle channel 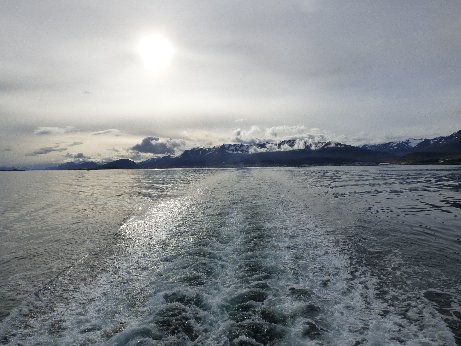 and did our first sea crossing to the Falkland Islands. West point was our first penguin destination – we saw magellanic 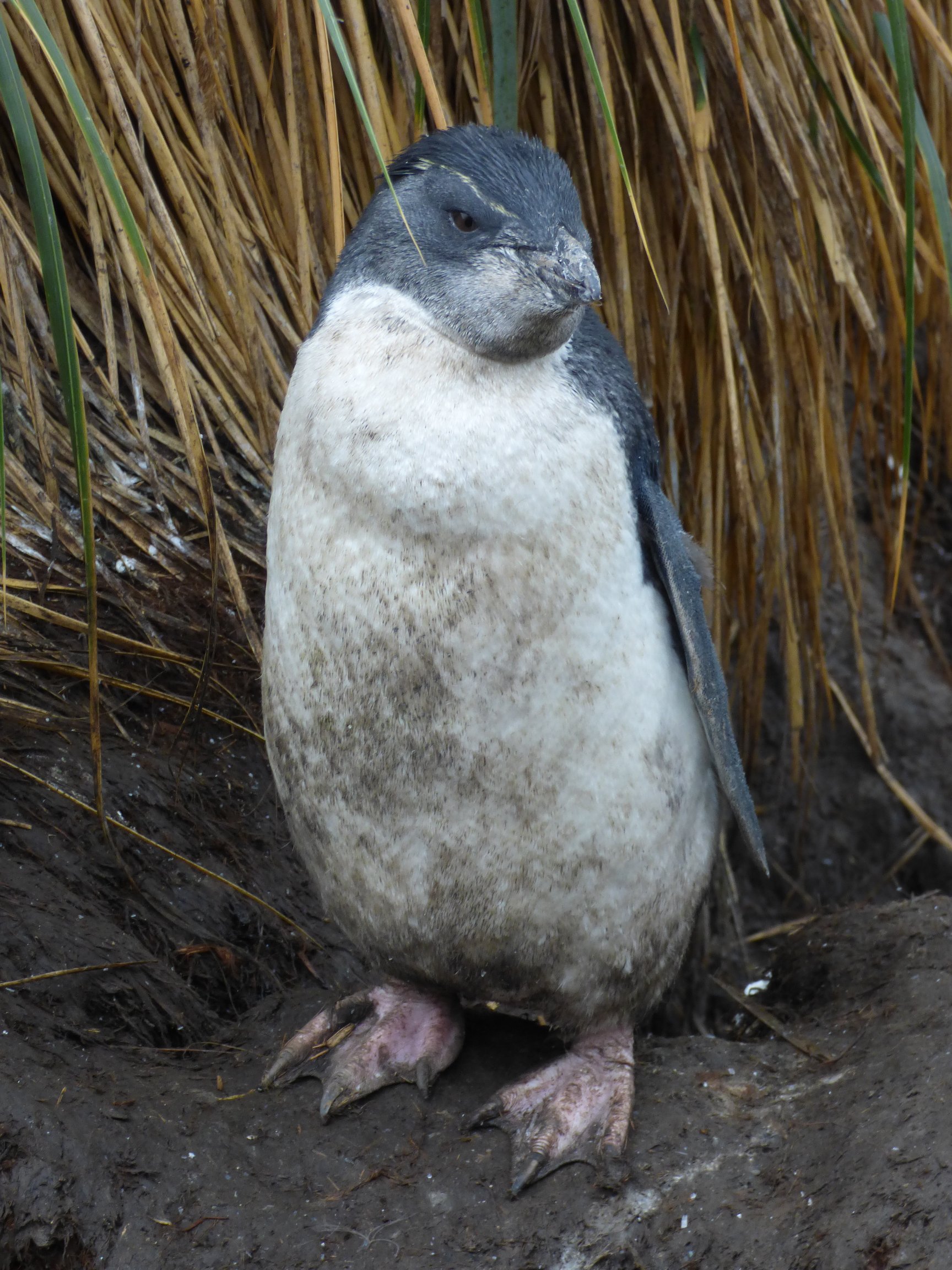 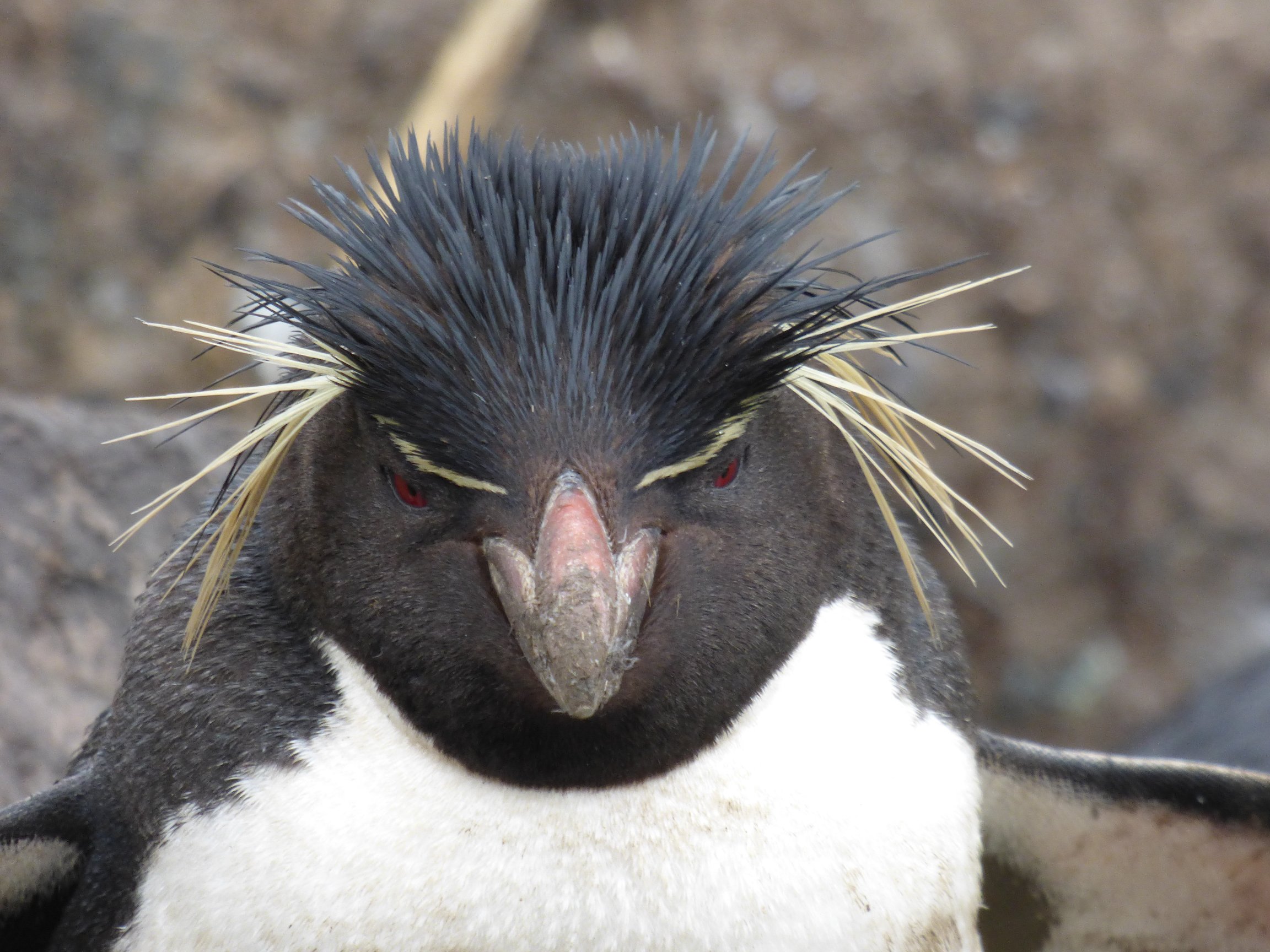 as well as black browed albatross 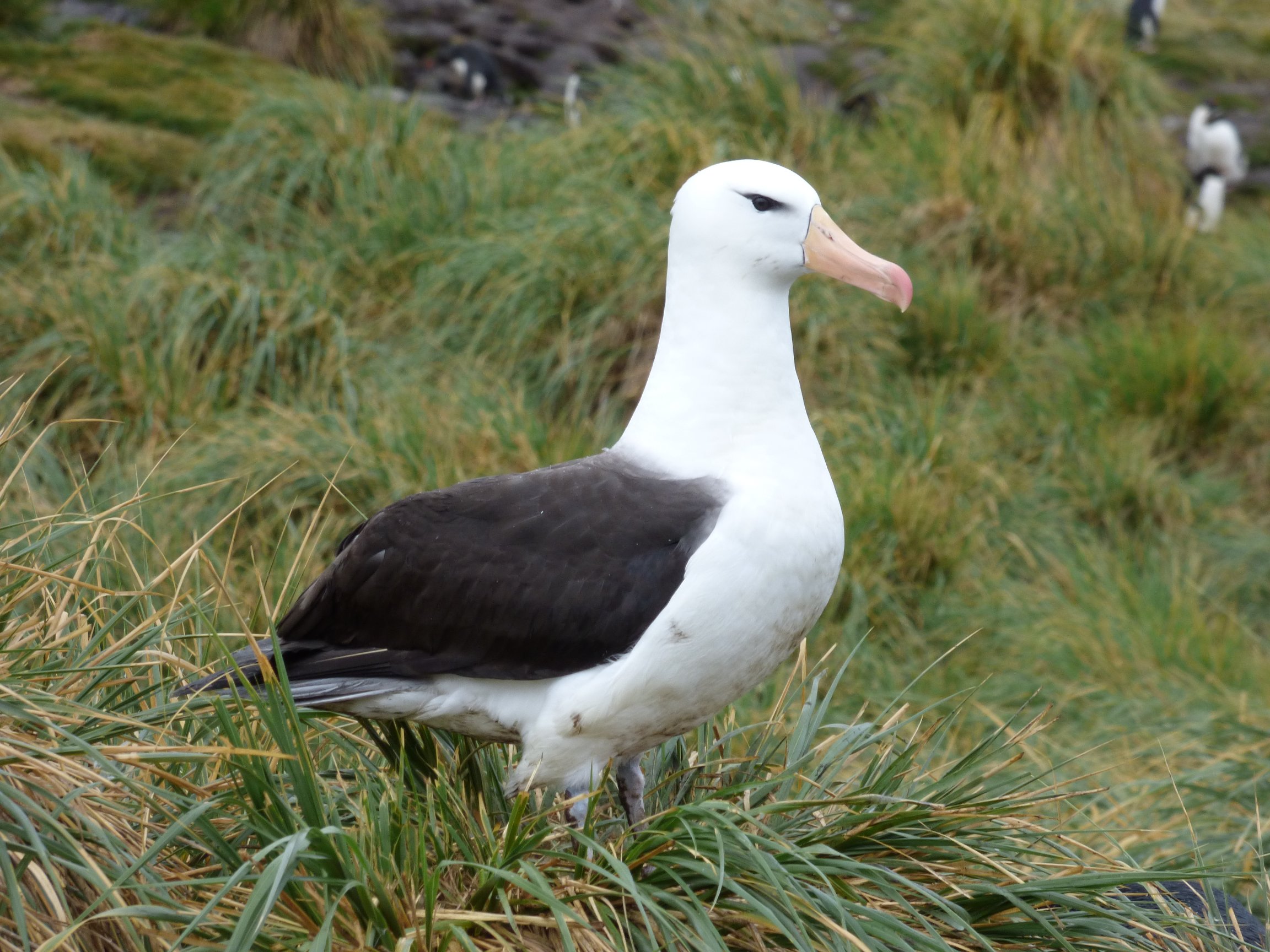 . The caretaker then gave us scones and cake.

Our second stop was for more penguins at Saunders Island. As we were doing the 2nd zodiac return we had our 1st experience of 60-70 knot winds 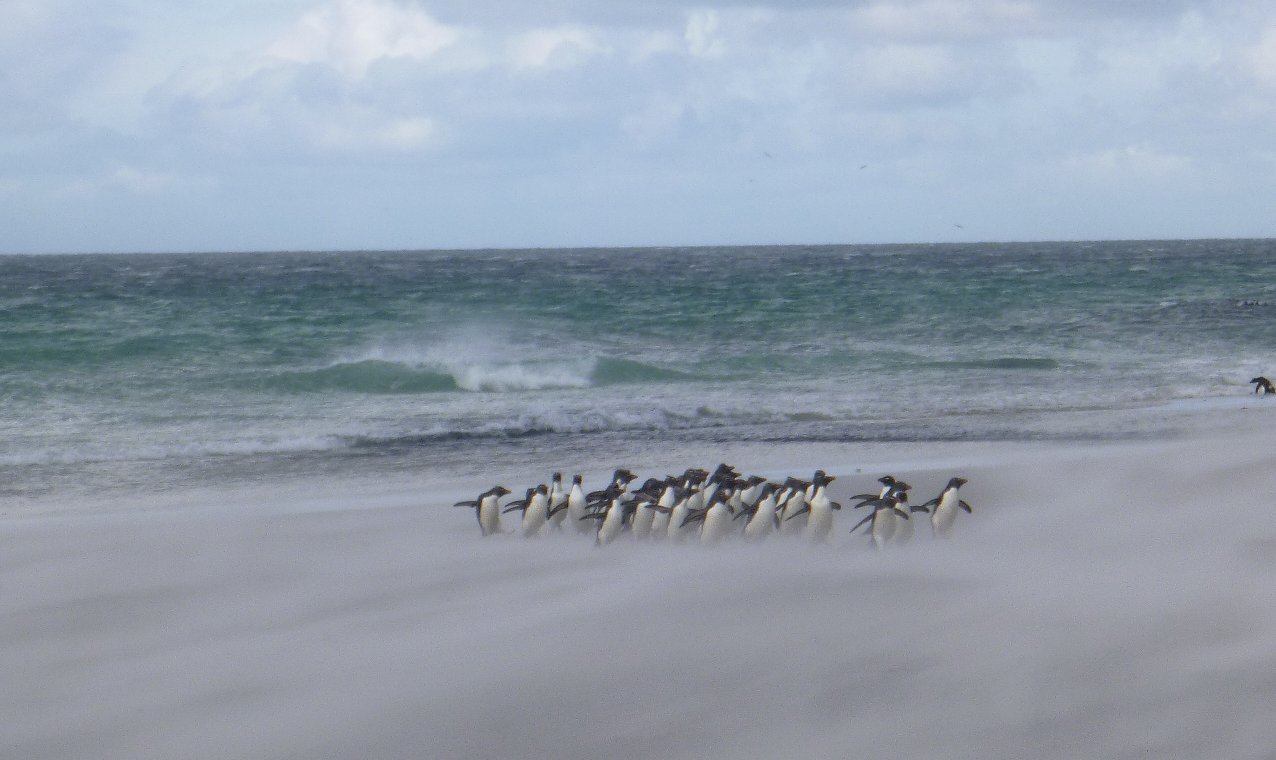 and hail which was fun. Commersons dolphins 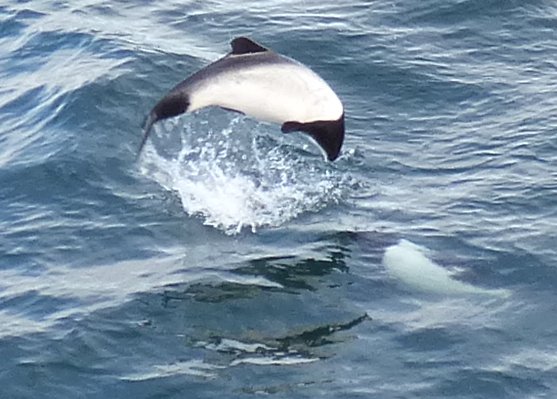 played round the zodiacs when we returned to the ship.

We finished off with 1/2 day in Stanley where I met up with a cub leader and got a Falklands Scout badge. The solar system walk 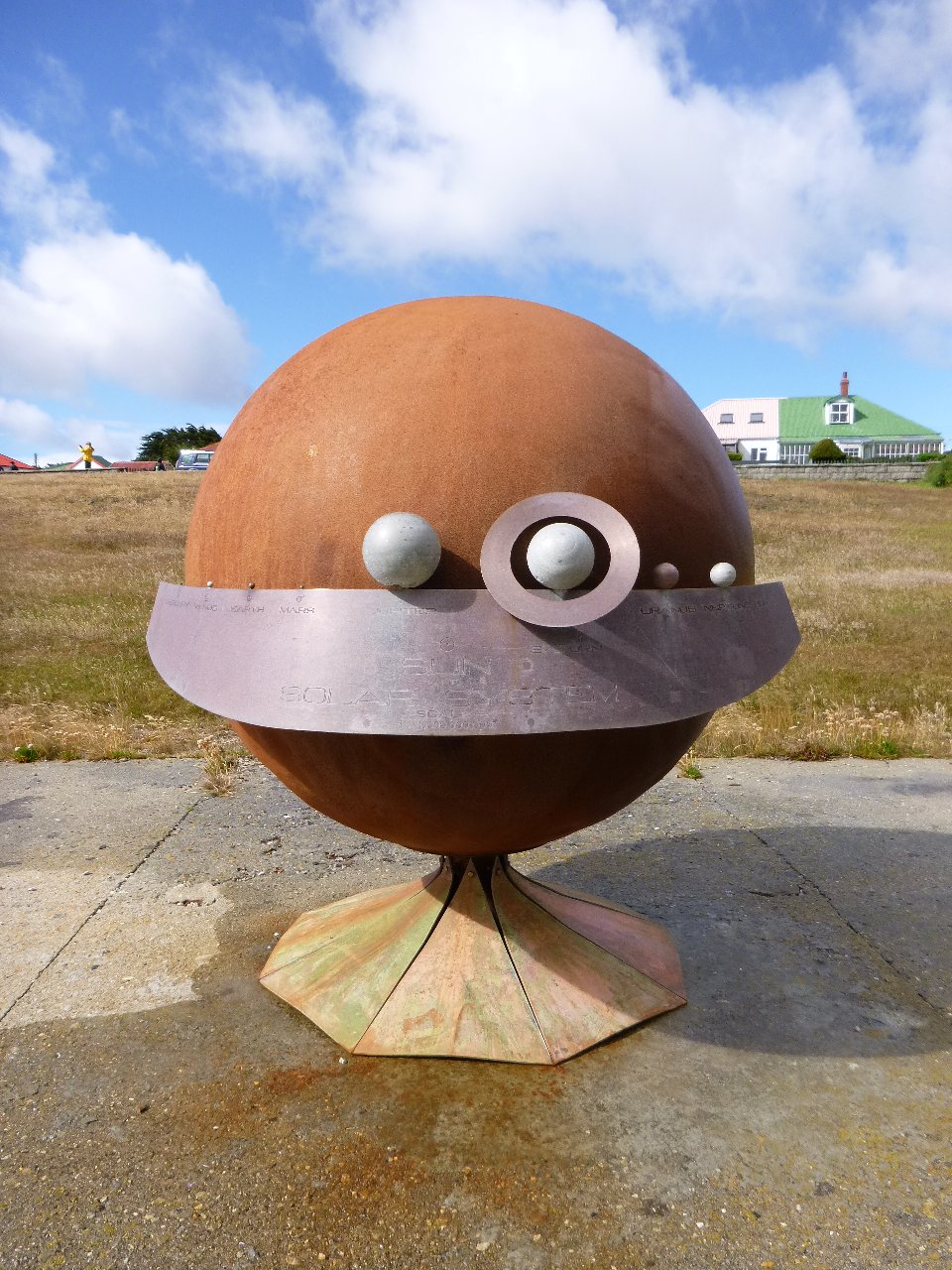 does include all planets but as it is to scale it would have taken all day to walk round all of them.

It takes a couple of days to get from the Falklands to South Georgia but we were very well entertained with a variety of lectures, a jazz night, and a Shackleton movie.

Around the time you cross the polar current, near the first bit of land you sight called Shag Rocks

, there’s also a big change in the level of the sea bed which makes it a great place for wildlife to feed. We had between 280-500 whales around us here

. This is not a regular occurrence – on my Arctic trip we had around 100 as we left Greenland and the marine biologist said he’d never seen anything like that, so you can just imagine his reaction to this many. There was a little bit of ‘weather’ 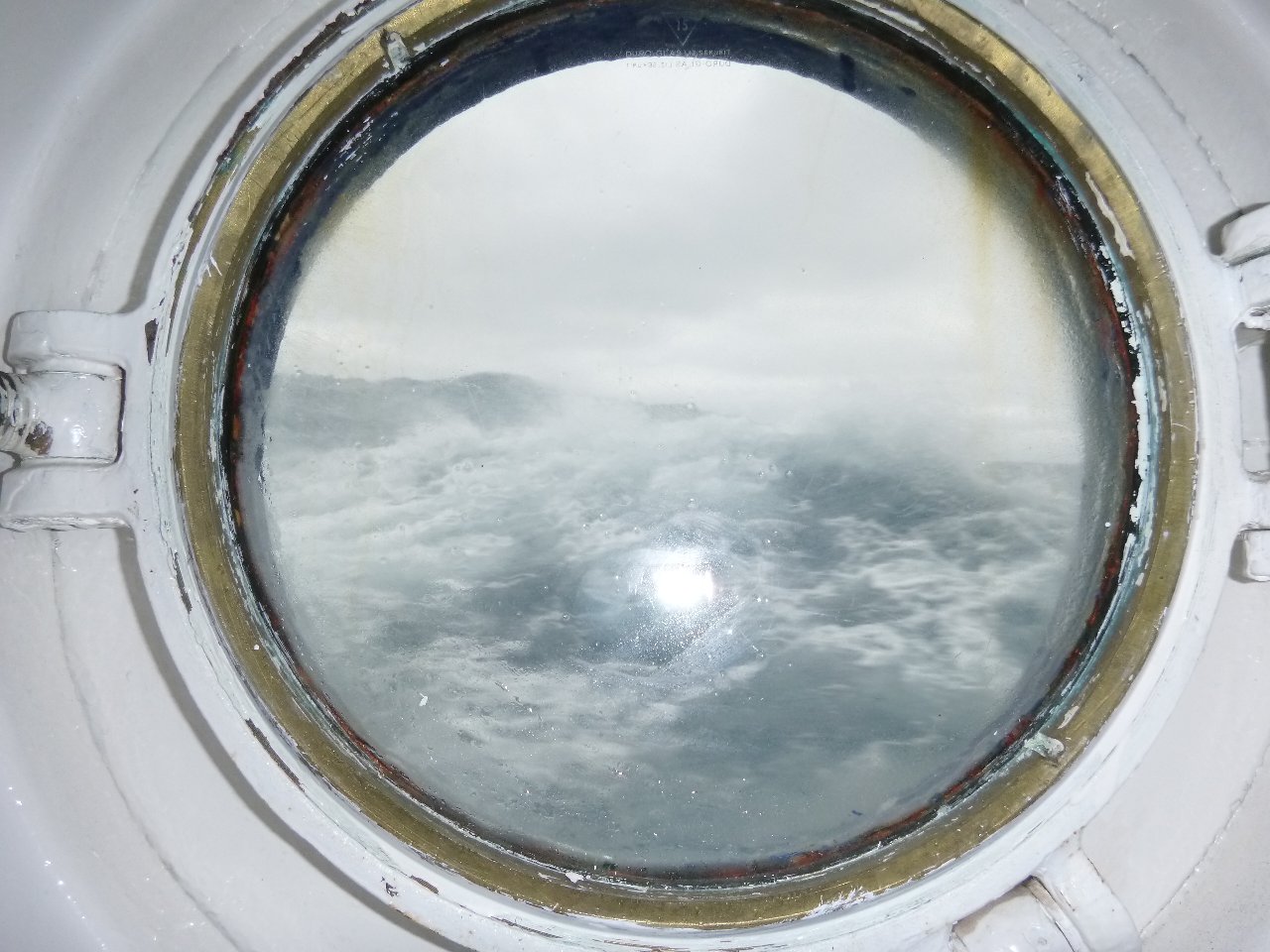 on this crossing but nothing too bad. 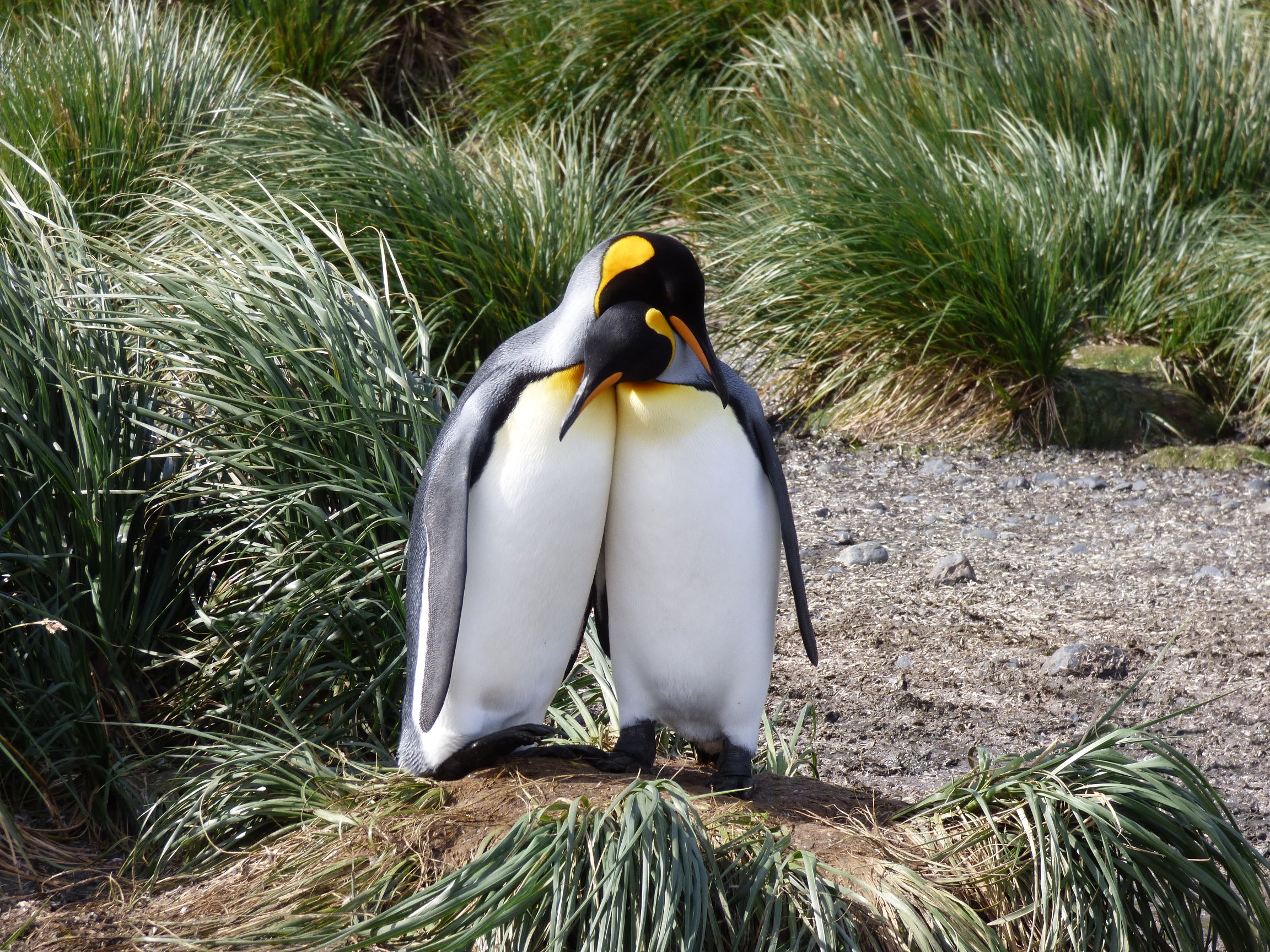 (Salisbury plain) king penguin colonies – usually if a landing can be made at one of them it’s considered good. St Andrews is also the main elephant seal colony 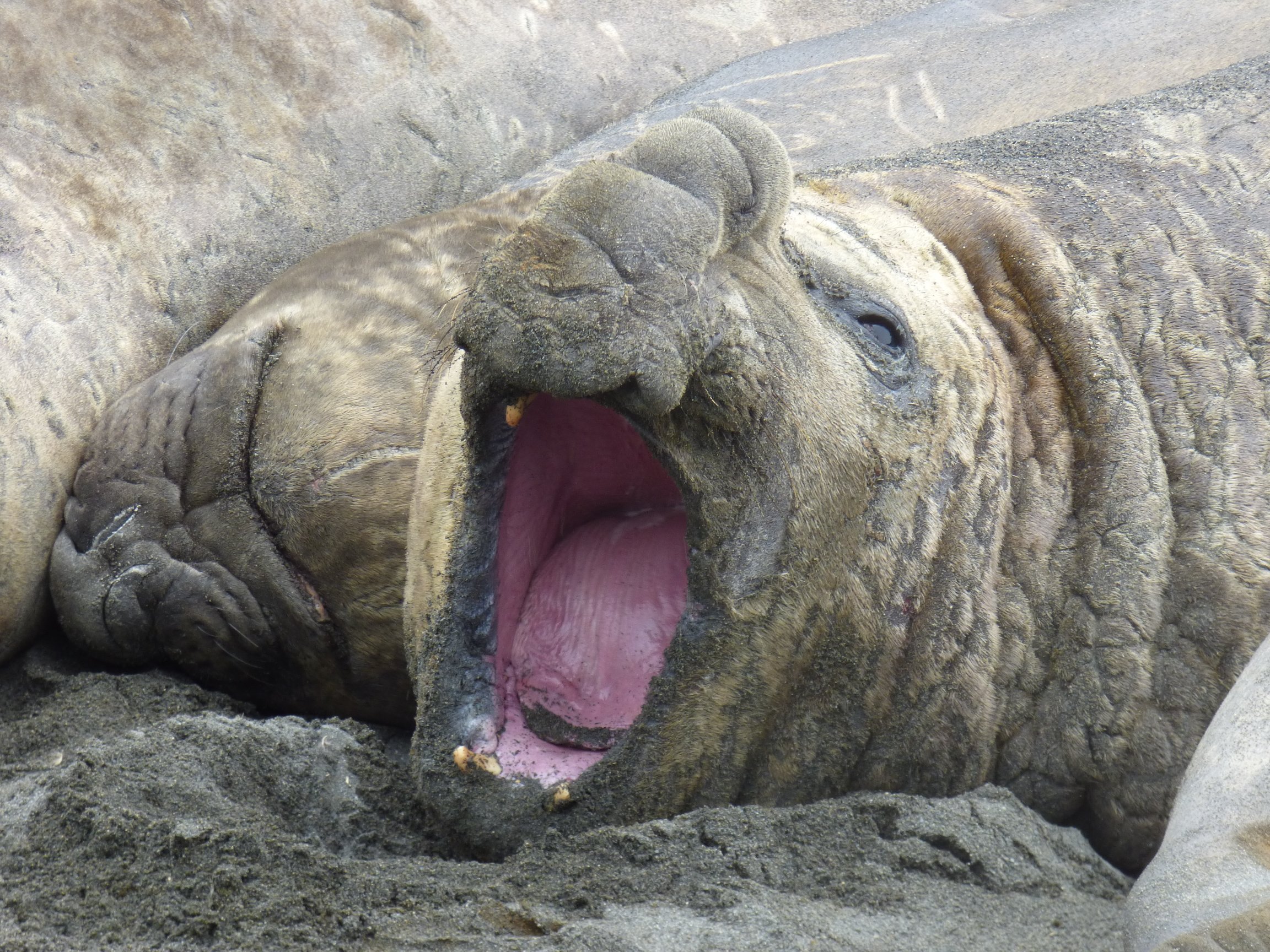 , and I was pecked by a penguin. There were gentoo penguins here too and more albatrosses (wandering and sooty 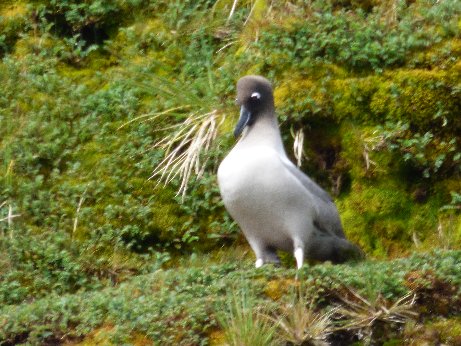 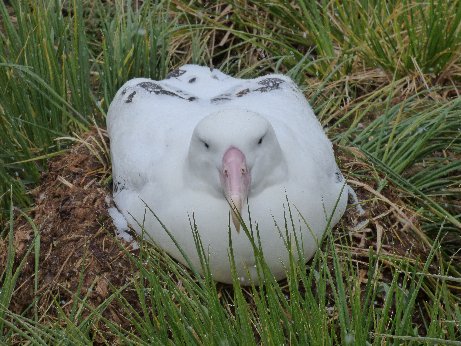 . We had a history day at Stromness 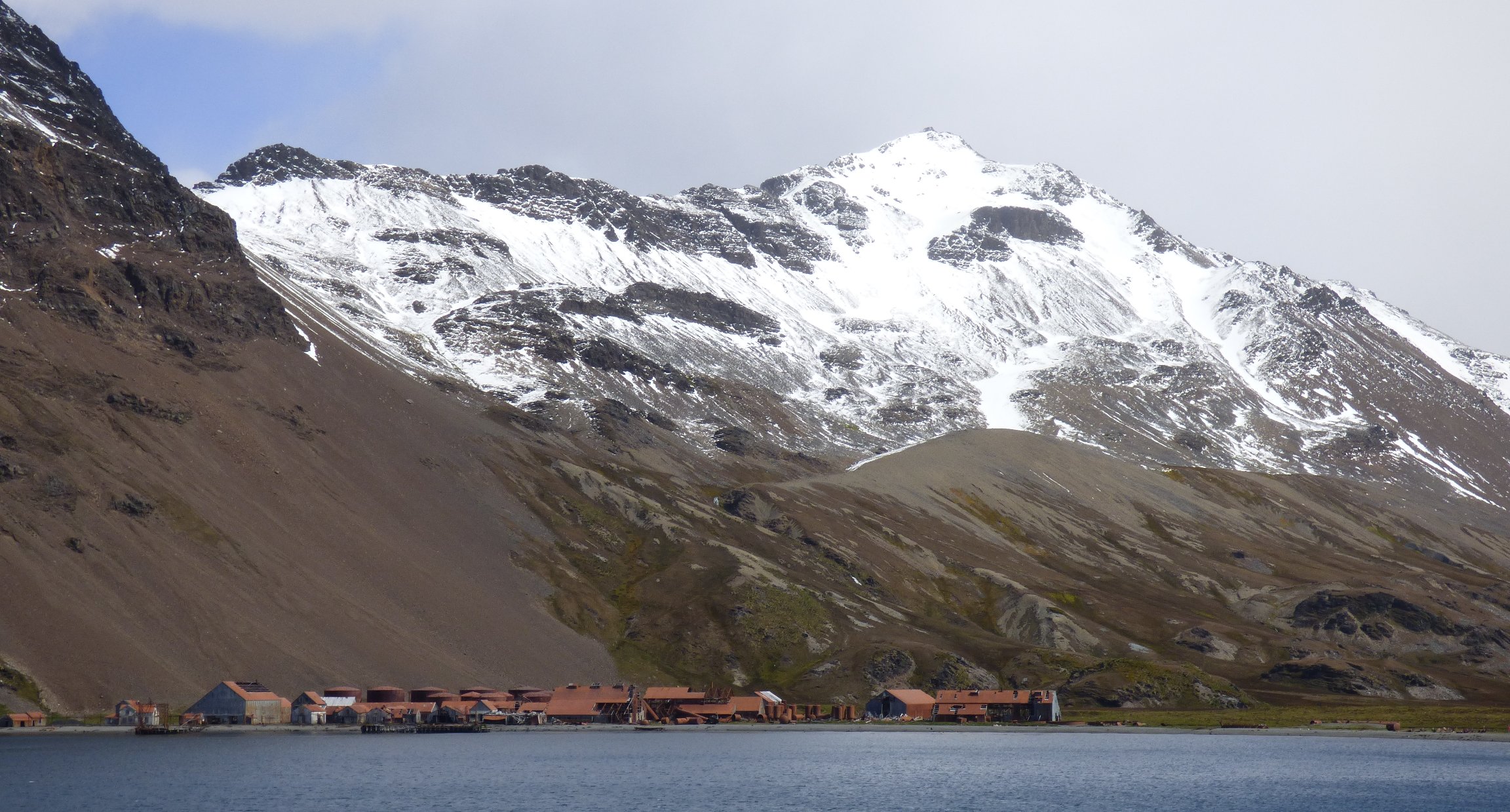 (some people re-created part of Shackleton’s walk) and Grytviken. The fur seals 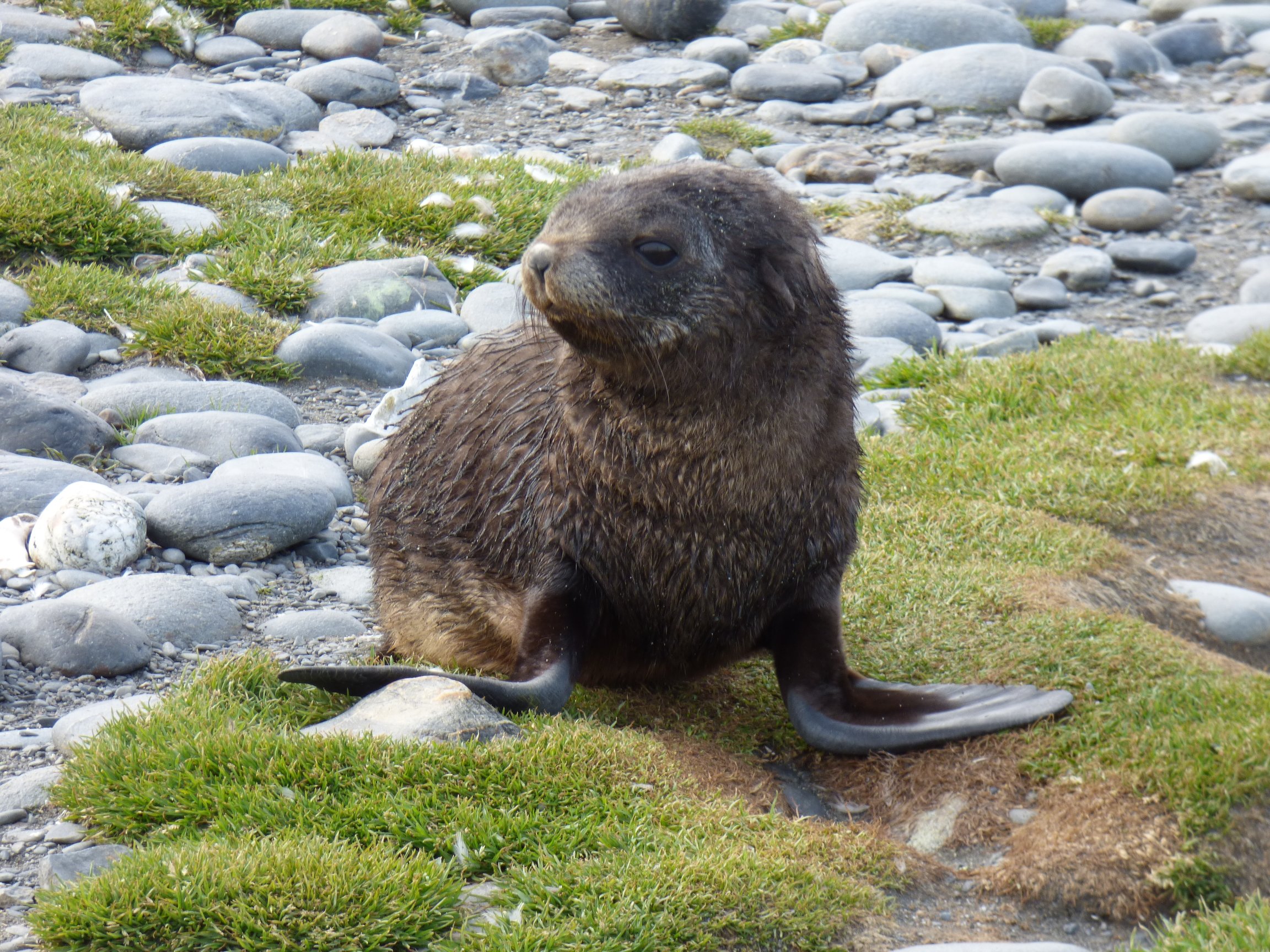 enjoyed trying to attack us at most locations. There was no chance of a landing as we started heading for the south of the island – there was so much wind it made a rainbow in the spray of the waves 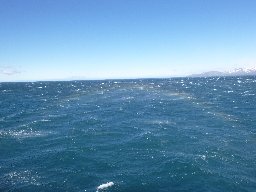 . We passed by a macaroni penguin colony but again suffered from katabatic winds and couldn’t leave the ship so we cruised through Drygalski fjord then headed for the peninsula before a force 7 storm caught up with us.

This was our ‘worst’ sea crossing 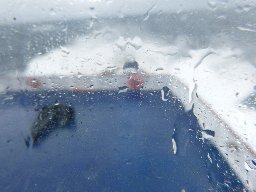 with approx 8m waves which went right over my porthole and up to the ones on the deck above. Entertainment was more lectures and a western night.

I was invited to join the staff team table at breakfast on one of these mornings which apparently improved the quality of the conversation. We talked about all sorts from stars (we’d done some stargazing the night before) to sextants – the staff found it difficult to agree how to use one and had some interesting discussions trying to measure a glacier in Drygalski fjord.

. There were at least another 120 whales around us again this day.

Our first continental landing was supposed to be a kayaking trip but katabatic winds appeared just as we were learning how to get into the kayaks from the zodiac so we ended up sat on shore for about 2 hours in kayaking kit while the staff tried to recover the boats. On the plus side an adelie penguin came within arms reach of me 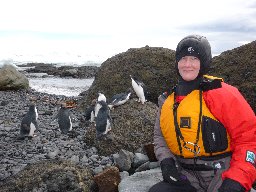 We headed south pretty quickly after this as landings had to be cancelled due to various kinds of weather and there were a lot of other ships around the top of the peninsula. We crossed the circle 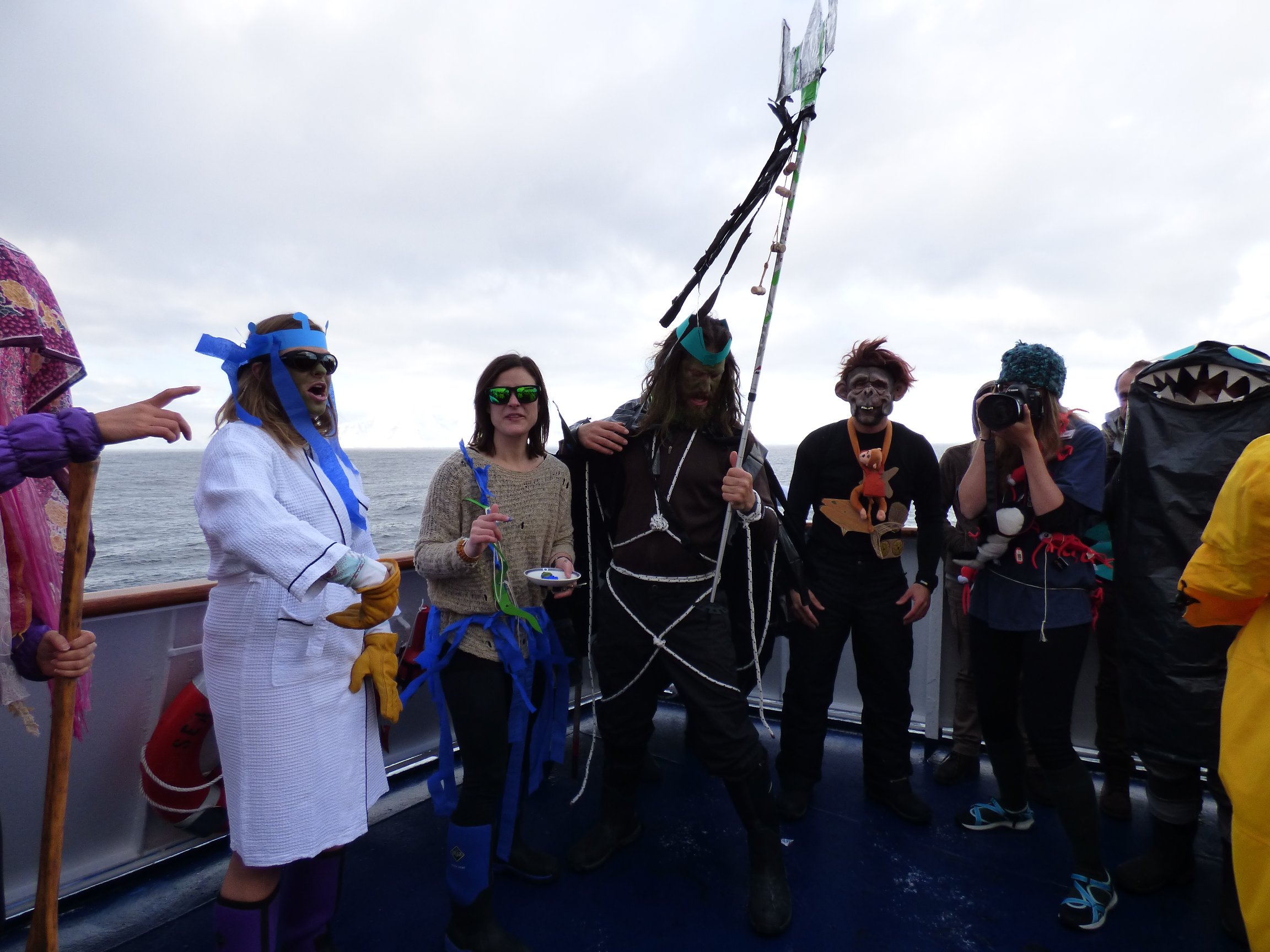 in snow then finally managed our first kayak 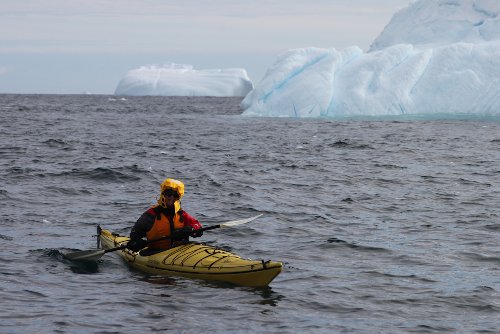 (south of the circle) and spent the afternoon ship cruising the furthest south any ship has made any attempt to go this season, towards the Gullet, in fantastic weather. We passed a leopard seal

on the way south.

Photos come nowhere near capturing it. This was one of the days I mostly just said ‘wow’ all day.

The following day we visited the Ukrainian base by kayak. On our way in we saw this little guy in his private swimming pool

. In the evening we zodiac cruised in so much snow everyone was having snowball fights 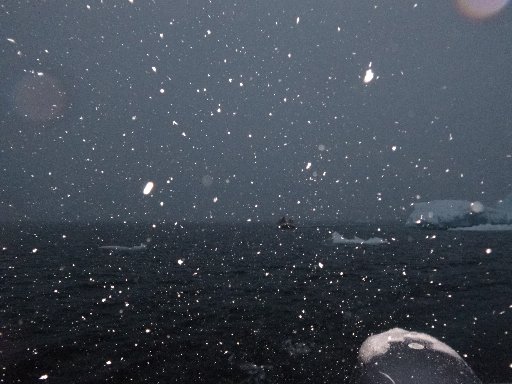 The next day Alex made a very ambitious plan for 4 landings (3 of them were kayak options – I decided to zodiac cruise on one instead) but it paid off. We had a pre-breakfast sunrise trip and a walk up a very steep hill in very deep snow at the Argentinian base. Neko Harbour had the most perfect paddling conditions 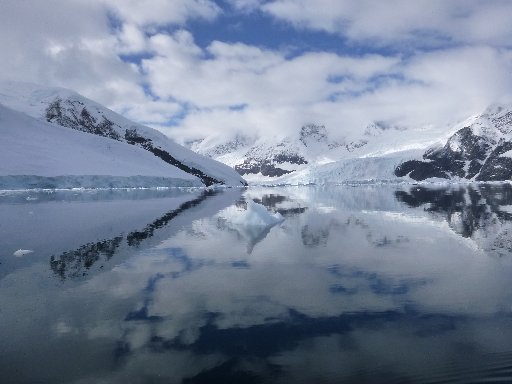 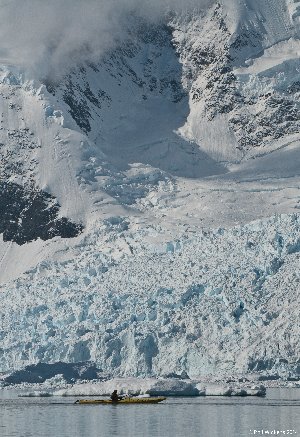 and in sun (and also the first time I got a boat I was comfortable in). We got to see/ hear calvings and an avalanche here. There was more ship cruising, lots of use of the word ‘wow’, and some really close whale encounters at Useful Island in both zodiacs and kayaks – the most frequently used word was ‘tail!’

. The occupants of Jimmy’s zodiac were treated to being covered in ‘whale exhalation gunk’ they surfaced so close. Penguins were made to swim and jump alongside the zodiac as we made their prey move through the water

. We finished the day with a paddle at Orne Harbour where the whales played games with us – they disappeared under water to make us think they had gone, then we tried to call them for ages, and finally they surfaced right next to us

as if to say ‘we know you’re there and we are interested’ – this was repeated multiple times.

Our penultimate day was a cruise at Enterprise Island and what turned out to be our last paddle in more ice and sun at Portal Point.

. There was a storm with over 50 knot winds passing through the Drake passage this day so we were in no hurry to enter it! It did affect us as we had to wait until we were fairly sure the high winds were stable enough for us to be able to do landings but this meant it was a much better last day as we managed 2 walks – 1 of them to a crater 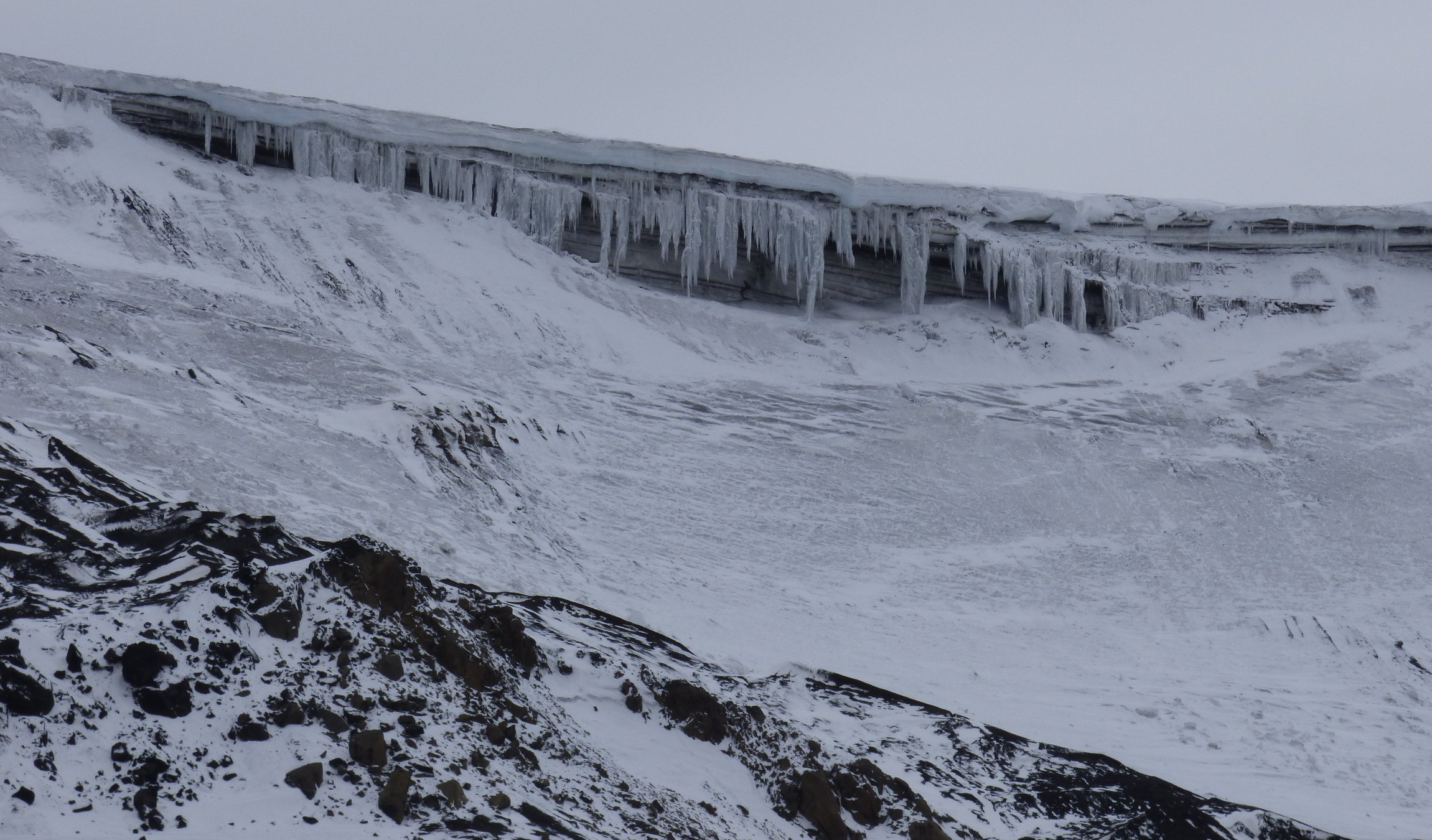 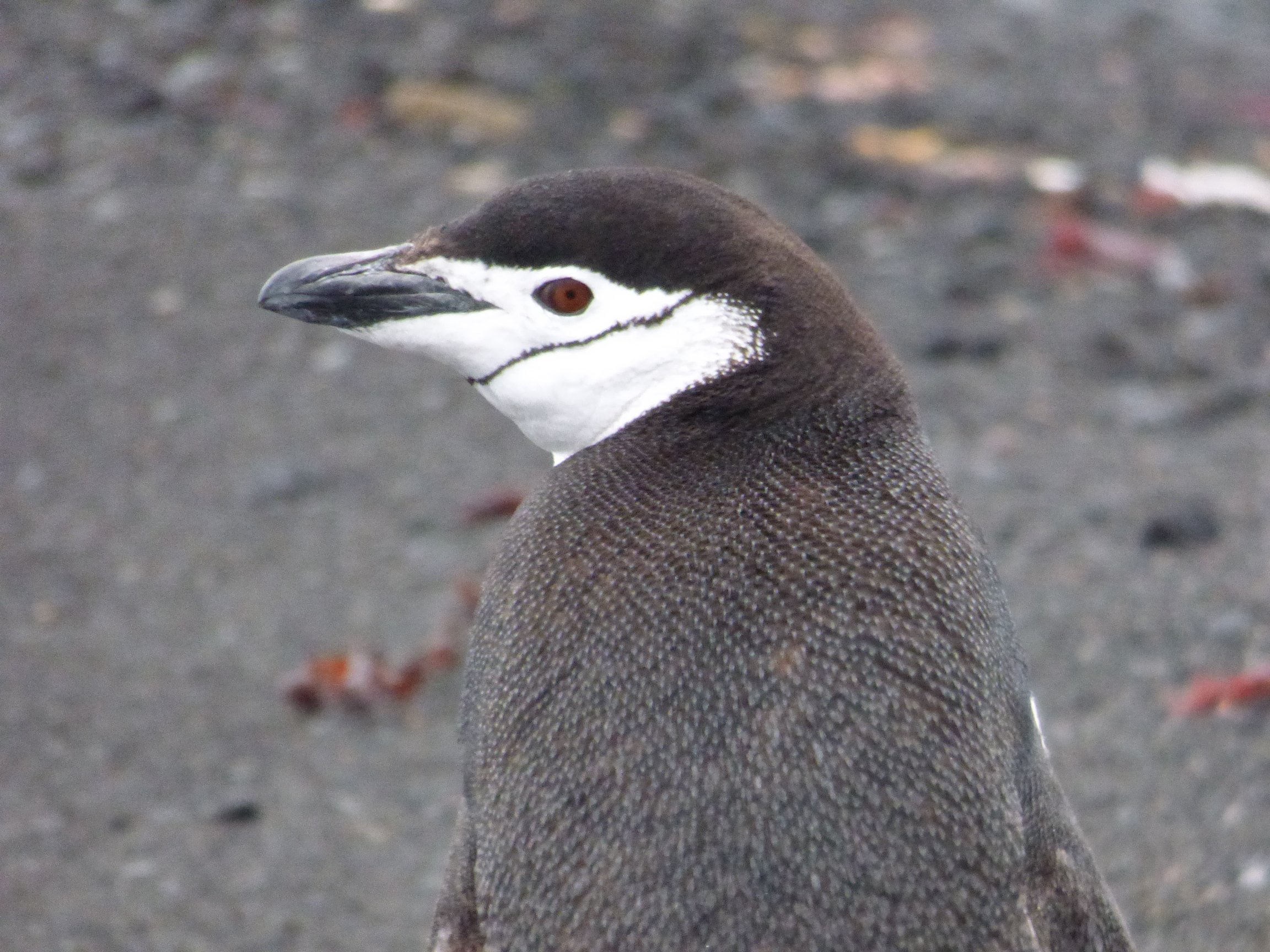 (they don’t normally get visitors but knew we were there and asked if we had any cigarettes going spare). Tea was macaroni cheese followed by some amazing chocolate creations 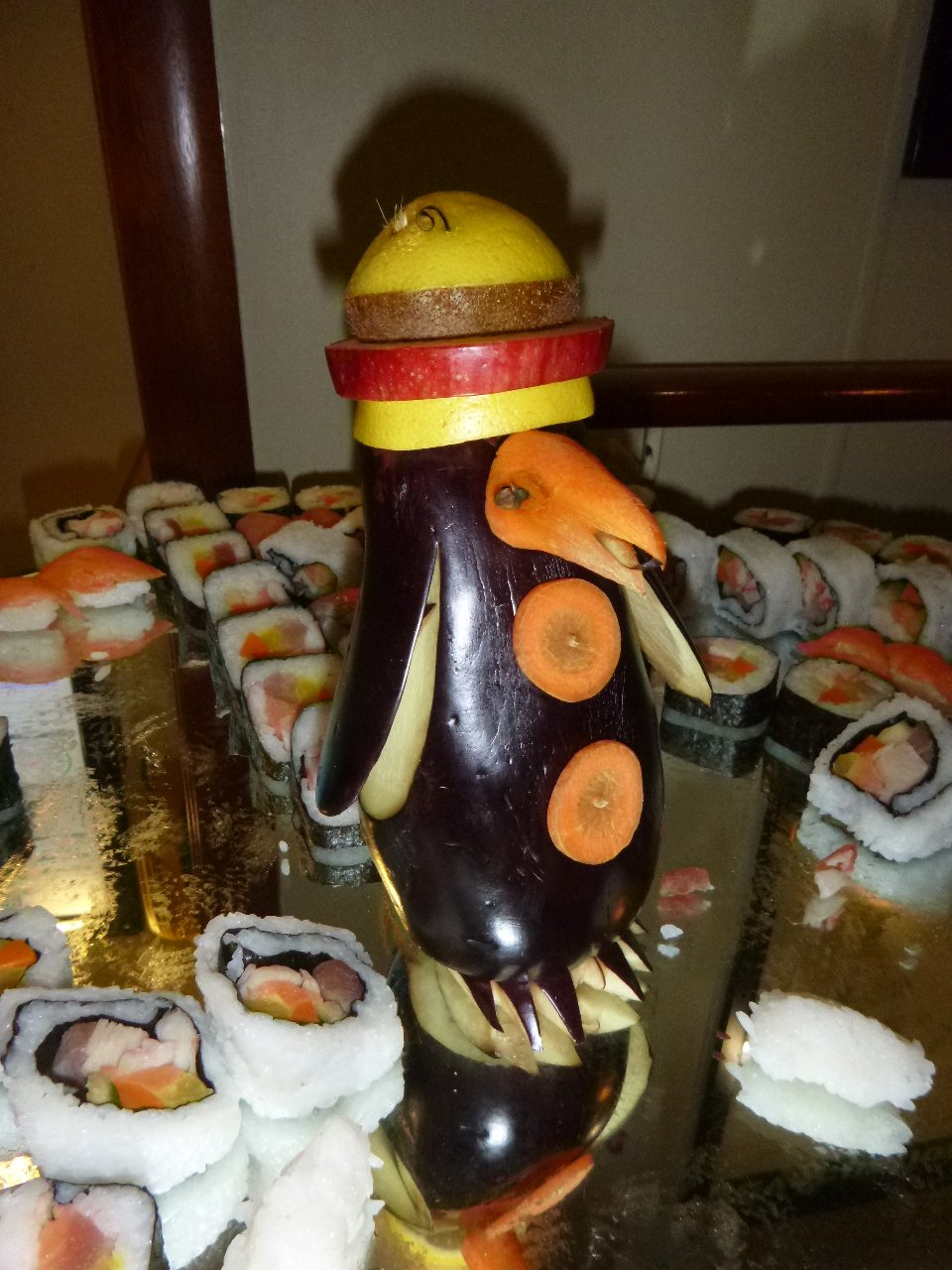 We started our Drake crossing late but it was very good and quick despite the expected residual effects of the storm. I have to admit by being a little disappointed – no waves crashing over and I didn’t suffer from seasickness at all. We requested and were granted permission to approach very close to Cape Horn

The last evening on board I was chatting to Alex and he told me he considered the expedition to have been ‘flipping’ awesome and probably his best Antarctic one on that boat – he’s done most of them on that boat.

As we headed into port on the final morning another ship also docked. It was the Vavilov 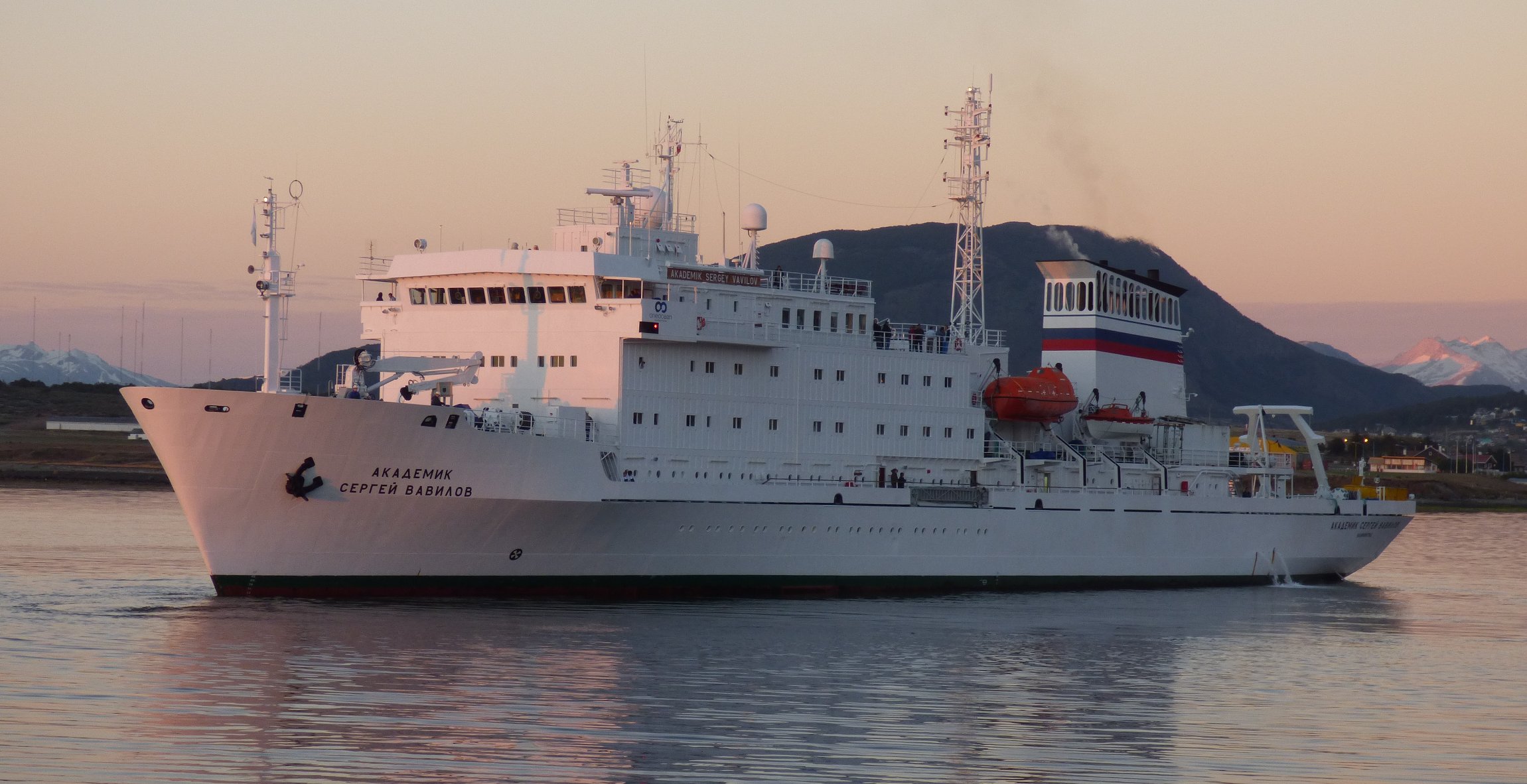 – the Russian ex-spy ship which had been my home for 2 weeks in the Arctic.

I do have more detailed maps and logs like a full wildlife list – if anyone’s interested in seeing those let me know. I also have many hundreds more pictures of penguins and ice if you haven’t seen enough of those.

My next adventure will be back to the Arctic for more polar bears, and maybe 80 degrees and northern lights.