Ever since primary school I have had a yearning to go to the Arctic. There was something magical about Greenland that made me want to go there. I eventually made it to the Arctic (Finland and Norway) and crossed the Arctic circle on land, but still a part of me was unsatisfied. I had flown over the south of Greenland en route to Canada and seen icebergs from the air. Finland had provided reindeer but I also wanted to see polar bears and arctic foxes. Could I combine bears, foxes, ice, and Greenland in one trip? Iceland would be good to fit in as well. I found a trip which met my requirements on the Polar Star but it was cancelled. I was extremely disappointed. I had to wait another year to join Quark‘s 3 Arctic Islands 2012 expedition, but in hindsight this was probably not such a bad thing as everything we did get to do was perfect.

I spent a couple of days in Iceland before the expedition. From the airport I went direct to the blue lagoon 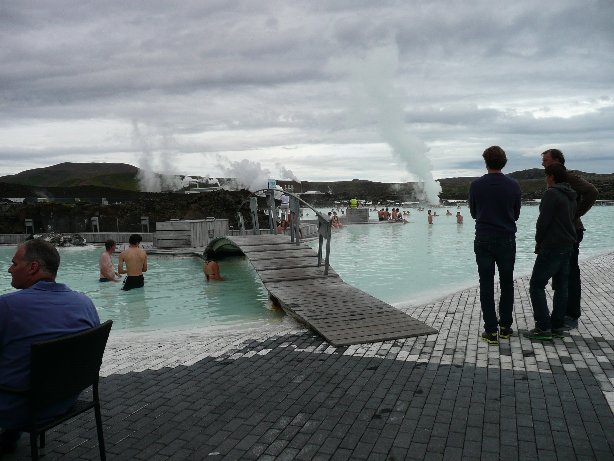 – it is probably the most expensive and best swim in the world, particularly so since my flight was delayed taking off and I didn’t want to be getting into the city too late at night.

Upon arrival at the Youth Hostel I went to my dorm and looked around to find all the bottom bunks taken. There was a white-haired lady sat in the chair by the window, I acknowledged her. I was throwing my rucsac on to the very high top bunk next to her when she asked if I’d had a hard day (I must have looked tired). At this point I was doing a bit of a double-take between her and a note on the bed next to me which said ‘this bed is reserved for Marie White’. I made some kind of vague response. Two of the young people opposite at this point asked her where she was from… Canada. I felt I had to butt in with ‘I think I know you, or rather you know my mum!’. She immediately realised who I was (we had met in 1989ish) and said she thought I had looked like my mum when I walked into the room but obviously was too young. She joined me on a walk to the seafront where we looked at the voyager sculpture 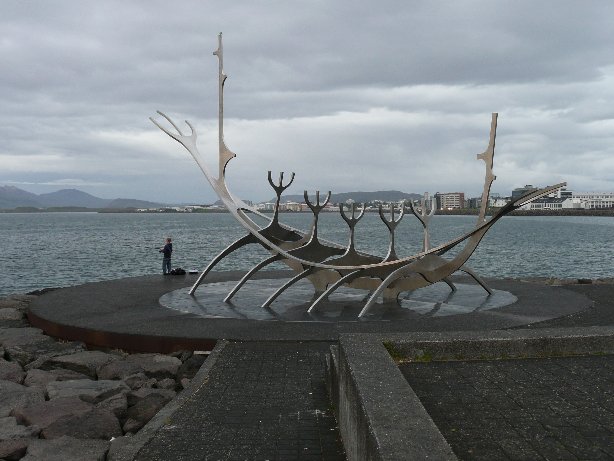 and the Harpa concert hall 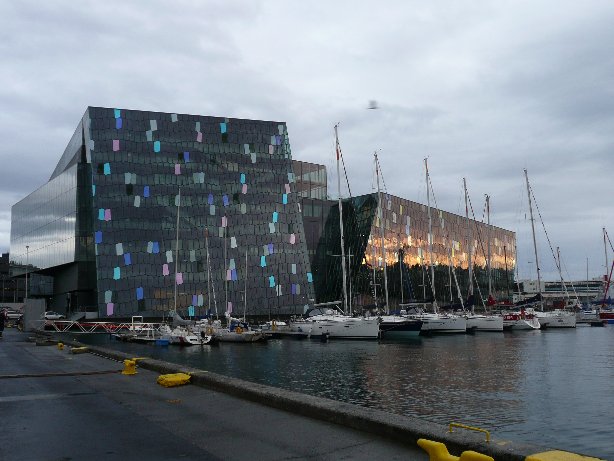 – a building with some coloured windows which look cool in the right light. 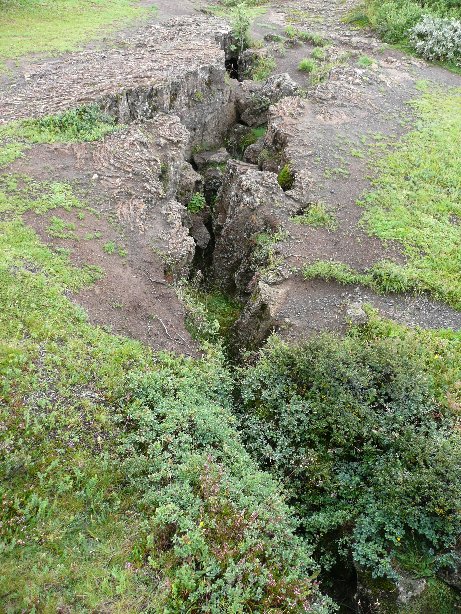 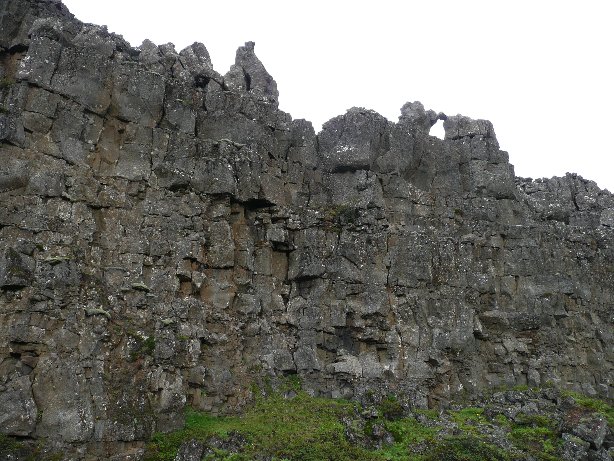 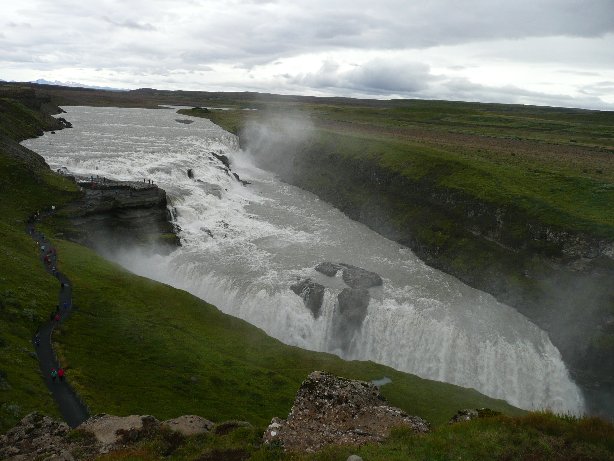 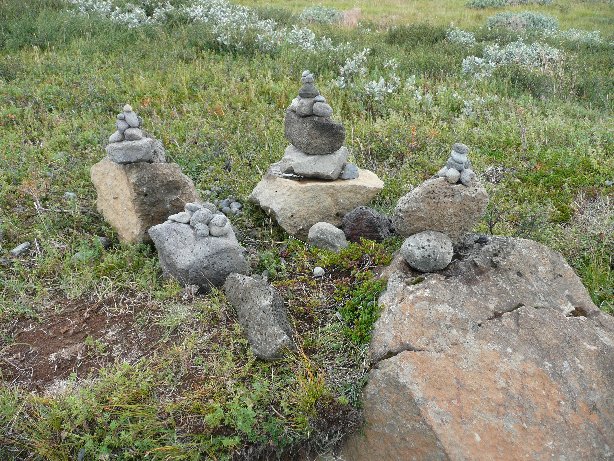 , the geothermally active valley of Haukadalur which contains the geysers 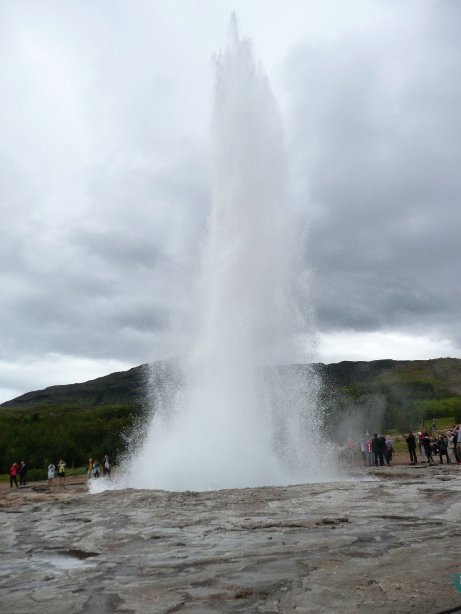 Geysir and Strokkur, Skálholt church (where we got a rare view of the Hekla volcano

), and the Nesjavellir geothermal power plant.

The third day before we boarded the ship I had several hours free first to explore Reykjavik. I walked up to the Perlan

which had great (free) views of the city, also up the Hallgrimskirkja tower 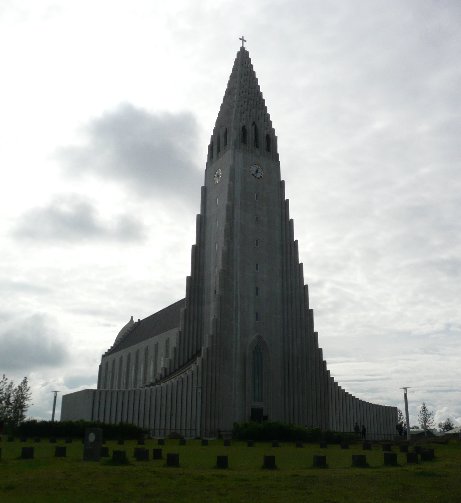 whose views were more restricted and also cost money, saw a volcano show, briefly looked at the map in the city hall, and spent some time relaxing in Tjornin park

We were all collected from the hotel by bus and taken to the ship together. It’s an ex-Russian spy ship. I was first on. First off and last on was a more usual occurrence which I soon got a reputation for throughout the rest of the voyage. My room was right in the reception area, so although it was the smallest room on the ship I found it extremely convenient. 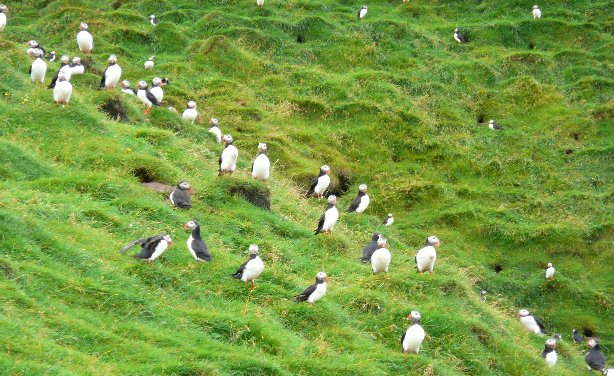 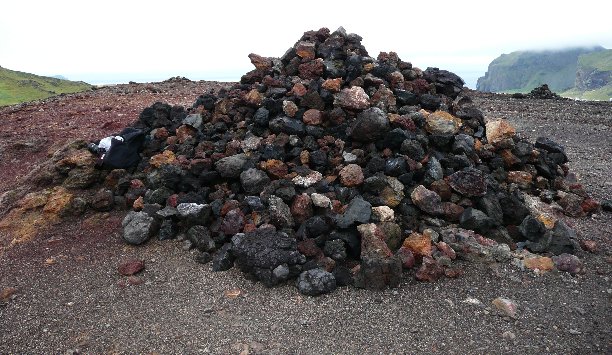 , and a buried but perfectly preserved street 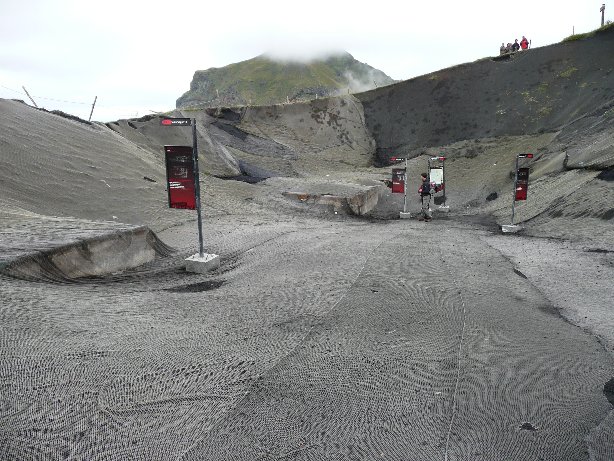 which they had started digging up 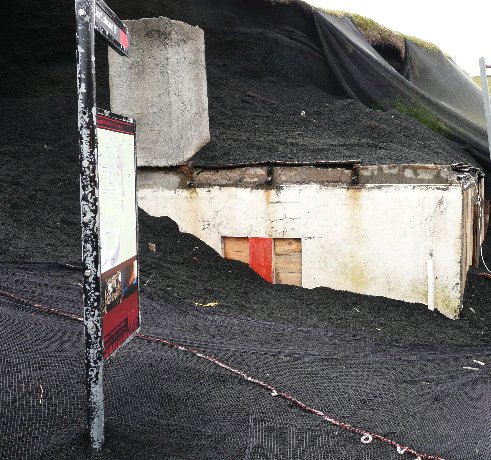 but will be stopping as the lava dust is destroying peoples cars and things. We also saw the destructive powers of lava completely crushing some houses 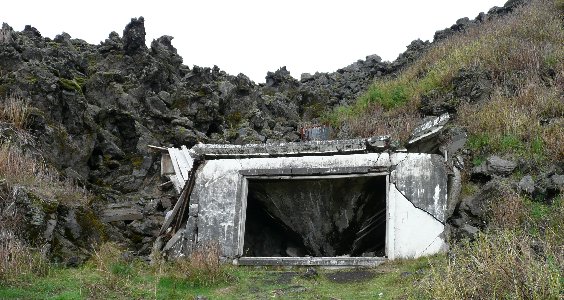 As we headed out into the Denmark Strait we passed Surtsey

(you can’t land). Atlantic dolphins played alongside us as we travelled. Neptune visited when we crossed the Arctic circle 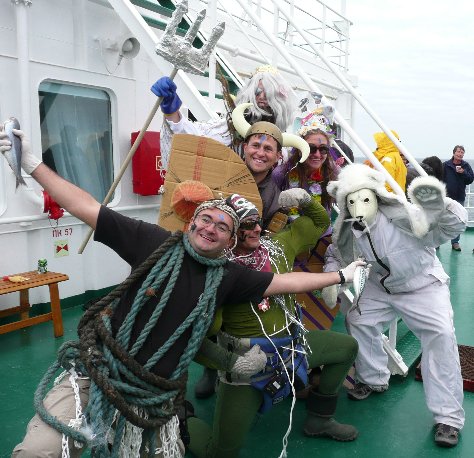 and most people “kissed the fish”. 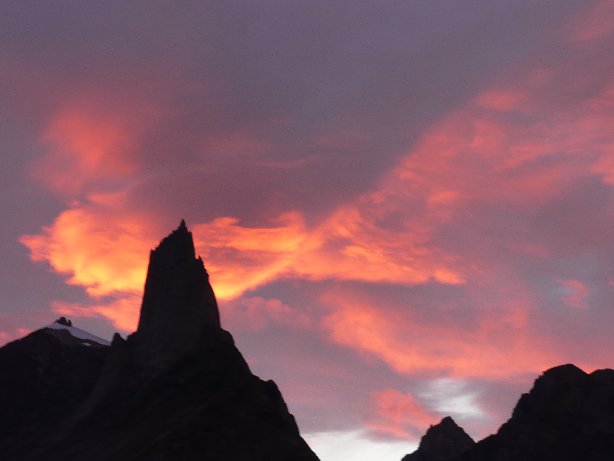 . We saw lots of icebergs from the most productively calving glacier

in Hall Bredning. We explored Scoresbysund fjord well, and we are fairly sure we were the first people to go to some places such as Bear Islands (sadly they only contained musk ox

and birds, no bears). One of the icebergs at Bear Islands had been sculpted by the sun to be the same shape as the island behind it 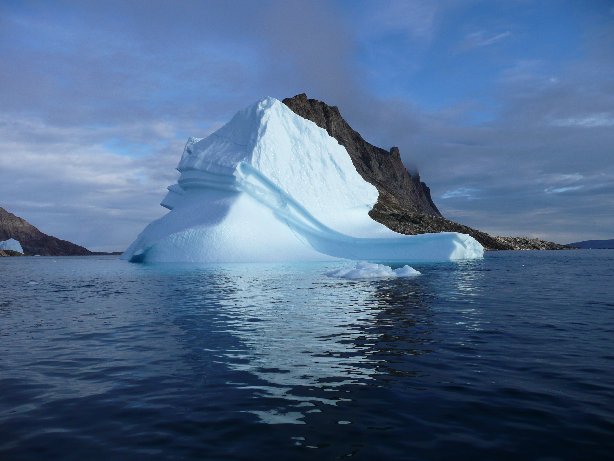 . Rodefjord is named because of the colour of the rocks

, due to the minerals in them. You will see an Arctic forest 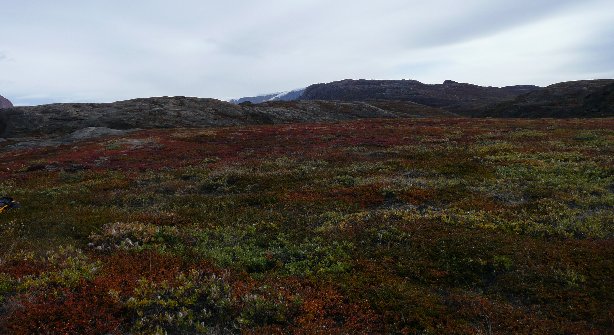 in some of the pics… if you get lost in an Arctic forest you stand up as it’s only a couple of inches high! The weather was great – I sunbathed in 14 degrees on the back deck 3 days in a row. We had several great zodiac cruises among bergs – 1 day I chose to go cruising twice rather than walk up the edge of a glacier and this was when we possibly saw our most interestingly shaped bergs 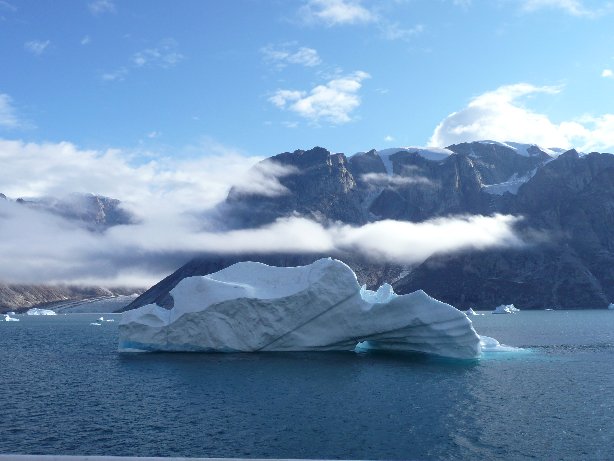 . At several points it seemed as if the entire horizon was ice and there would be no way for the ship to get through but it always did. Two of the other ‘most interesting’ bergs in Greenland were a nearly clear one 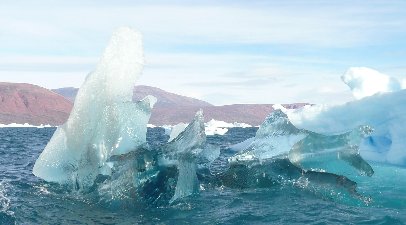 and one which was all blue

. One berg was very prettily striped with the mud all over it

I think it was our 2nd morning in Greenland when we were relocating overnight that I first started waking up very early. Seeing lots of icebergs floating by outside my window made me feel I was seriously missing out. Up to the bridge I went. The Russians were so surprised to see me they actually spoke (the most people usually got was a nod when they were helping you on and off the gangway). This became a regular occurrence. Alex, the expedition leader, made a point of commenting on my enthusiasm (all the staff were bouncing off this) and lack of sleep – he made his wake-up calls to the rest of the ship from the bridge but there were very few days I wasn’t there with him when he was doing them.

Our final day in Greenland we did a landing in Hurry Inlet. A few of us found a polar bear track 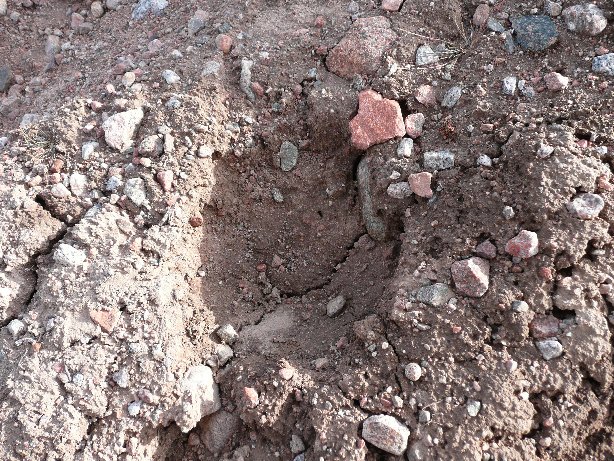 . Unfortunately it was not very fresh and I was not allowed to try to track the bear. I was still very excited and back on board told Alex who put Jim on watch duty. The last stop was at Ittoqqortoormiit where I was quite disappointed to learn we had missed a bear visit by a day. One of the local children had been paid to dress up in traditional costume outside the church for us to take photos

– it had been made by her grandmother and was mostly sealskin, even down to the red in her necklace.

– in all his 20 odd years of being a marine biologist Jim had never seen anything like this. 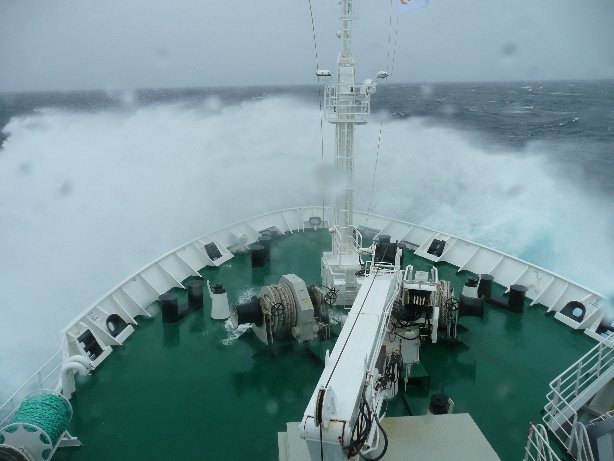 . We were supposed to head up to the north of Svalbard to get to 80 degrees then work our way down but we had to change our itinerary to accommodate a minority of passengers disembarking early (their cruise had been cancelled so they’d joined ours). As a result we stuck to the bear name theme for our excursions.

The first Svalbard afternoon in Hornsund was quite disappointing as I’d built myself up to expect a polar bear. The staff were quite worried about finding us one at all and we all spent many hours hunting for one in zodiacs. We did see more puffins, a glacier calving, and a bearded seal

The second morning in Recherchefjord, Bellsund I was up on the bridge early as usual. Jim and Alex were looking out and I soon learnt they thought they had found a bear

. There were actually 2! I was keen to be off the Vavilov to get closer but Alex said “that bear’s going nowhere, people need breakfast first” so I had to be patient and hope he was right. In the whole trip I had never been on any of his walks or in his boat, but he had commented that I was the most diligent passenger as I never wanted to miss out on seeing anything. This morning, as was often the case, I was first off the gangway and Alex was in charge of the first zodiac. Normally the first person in sits at the back – which I quite like as you get a clear view behind without people. This cruise must have been the one and only time this got changed – on stepping in he said to me “you I want there, centre front”. So I was well rewarded for my enthusiasm 🙂 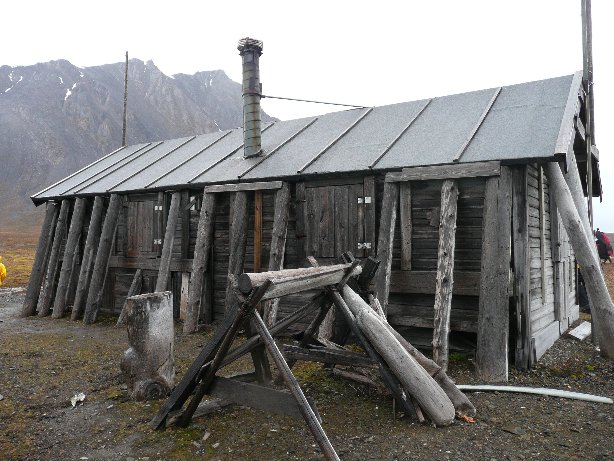 which is well protected against polar bears with nails and strong supports, and whale skeletons 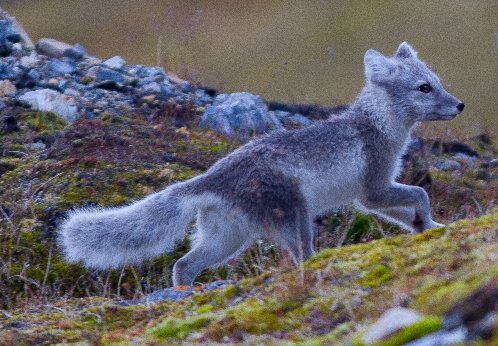 , and reindeer. And more birds, some showing off their flying skills very nicely. 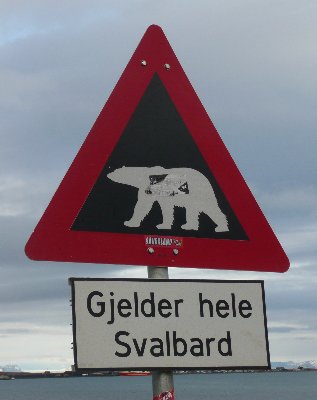 In his 6 years of working in the polar regions Alex said this was his best trip.

Next stop Antarctica, then I will be seeking more polar bears and aiming for 80 degrees north again!