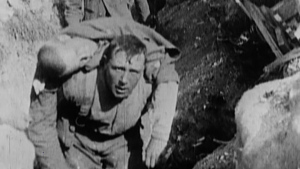 Sydney was born in Essex in 1890. His name was spelt Sidney on his birth certificate. In 1906 the family moved to County Durham and Sydney worked as a blacksmith in Fence Houses, at Houghton Colliery, and then at “The Meadows” Colliery in Rainton until he was no longer able to work in 1947/48. He died in 1949 from cancer of the lining between chest wall and lungs, caused by his work. 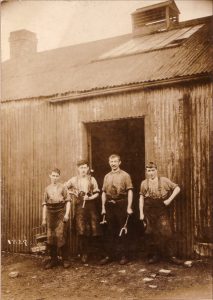 Blacksmith’s shop behind Grahams Stores, Fence Houses. Sydney is on the right.

Assuming the date on the film above is correct as 1 July 1916 in the Somme I have found war diaries. If we then assume that the 29 division mentioned on https://www.iwm.org.uk/history/how-iwm-is-trying-to-identify-the-man-in-this-film is what Sydney was with we get to a page which has a few from 1 July.

Sydney’s granddaughter, Joan, the only grandchild he ever met, clearly remembers being taught useful practical things by him when she was a small child. He is mentioned in her “wartime memories” at http://www.houghtonlespring.org.uk/worldwar2/houghtonlespring_ww2d.htm

Joan has researched Sydney from before 1995. At that point Sydney’s two sons had seen the film (above) and identified their father. A man who knew Sydney well – he trained as a blacksmith under him – saw the photograph (screenshot taken by Judi from the film) above in a WW1 exhibition and stopped in his tracks saying Sydney’s name – the photo was not named.

Sydney’s sons always claimed they didn’t know anything about his work in WW1 or any awards. In 2000 Phyllis, a Canadian niece of Sydney, told Joan that her grandfather had received a Citation and Medals.

In 2019 Joan’s cousin Chris informed her he had found and given away the medals to his sister-in-law after his father died! Roll on to 2021 and Joan told Judi this. Judi immediately got in touch with the sister-in-law and asked to borrow the items for Joan to see, the response was that they had been returned to the son because she thought they should be with his family. Pleased to hear this she got in touch with the son who clearly has no interest in this side of his family but now seems determined the medals are his property and is more interested in arguing about memories and accusing us of lying than being willing to let us see them. We have these photos but this will probably be the closest we ever get to the medals. 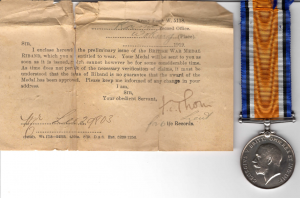 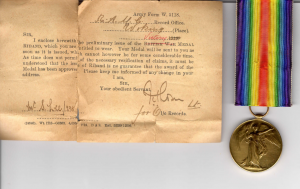 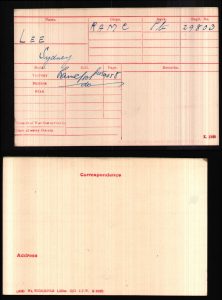 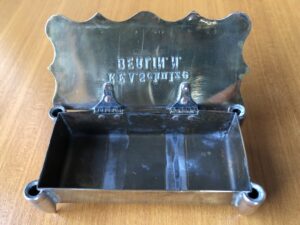 This is a box which belonged to Sydney. He brought it back from France after the first world war. When Joan was a young child she spent a lot of time at his house. Every Sunday morning he would get up very early and go out to put the heating on at church. Joan knew this box meant a lot to him. 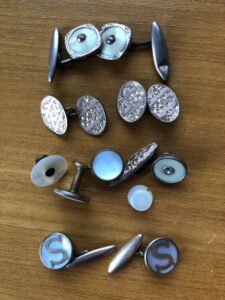 He kept his cufflinks and collar studs in it. Sometimes he would show her the box and the pearl things in it. 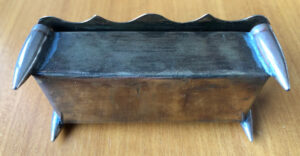 The legs are made from bullets. We think it was given to him by a German soldier who he had helped and saved. He would not have taken it if he did not want it and it did not mean something to him.

The box is embossed F.F.A.Schulze BERLIN.N – they are a manufacturing company. 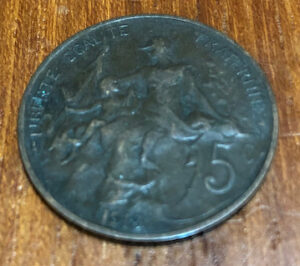 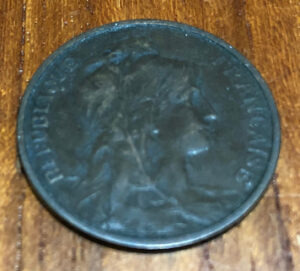 He also brought back this French Scout coin dated 1913.